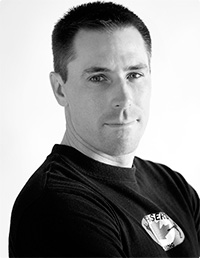 Chris Fraser has 34 years experience in the Martial Arts.  Fraser’s Kickboxing has proudly served the Maple Ridge, Pitt Meadows area for 15 years.  Chris spent seven years training Muay Thai Kickboxing under the internationally known Hon Lee.  He also studied Choy Lee Fat Kung Fu (also under Hon Lee), and achieved a first degree black belt in Kempo Karate.  In addition to Martial Arts, Chris also wrestled for five years and coached high school wrestling for another four.  Recently he has also received a purple belt in Brazilian Jiu Jitsu under Professor Jason Gagnon. Mr. Fraser has received degrees in Human Kinetics and Education, as well as a Level 2 coaching certificate.  His background as a high school teacher enables him to relay what he has learned in a safe and efficient way.

Dave Moen has been training with Chris for 16 years.  His dedication to the sport has made him a successful competitor and coach.  Dave assists with all aspects of the classes.

I’ve done several martial arts in my life and eventually took an interest in kickboxing. After a year at the first school I tried, I decided to try Fraser’s. I learned more about footwork and kickboxing fundamentals in the first three months than the entire time I was at the Read More…